Despite the recent surge of construction orders coming mainly from the container ship and gas carrier segments, BIMCO, in its new analysis of global shipbuilding, predicts a slowdown in the growth rate of the global fleet over the next five years. years compared to the last five years.

The Maritime Trade Association highlights the fact that despite new container ship orders currently at their highest in 14 years, global shipyards are under pressure. Based on the current market pace, BIMCO says 2021 is heading for the third lowest level of new construction orders in 12 years.

The global merchant fleet had a capacity of 74,505 vessels spread across 11 main segments, according to BIMCO. In their baseline scenario, the total fleet is expected to reach 79,282 by the end of 2025. This would represent a growth of 6.4% in the five years, compared to 7.4% in the previous five years. From 2021, BIMCO predicts that the fleet will have a compound annual growth rate (CAGR) of 1.25% in a baseline scenario through early 2026. The CAGR for the previous five years is 1.44%. In addition to the baseline scenario, a low scenario and a high scenario are provided to consider the impact of varying degrees of uncertainty on the future number of vessels in the market. 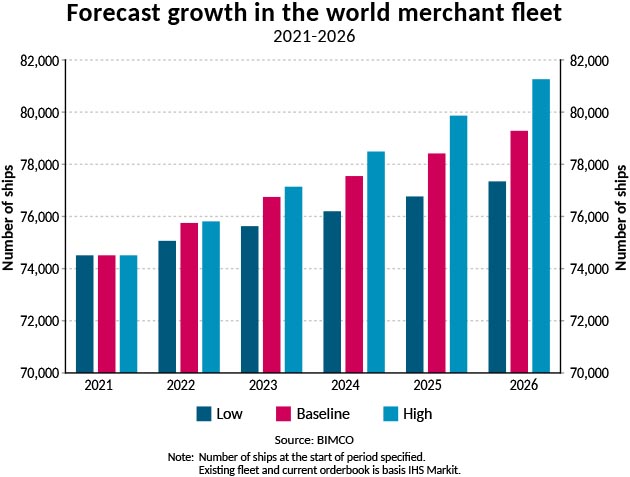 The global merchant fleet is expected to grow in all three scenarios over the next few years. In a scenario where a weaker than baseline outlook for world trade is considered, the fleet will grow at a slower pace and is expected to have a compound annual growth rate (CAGR) of 0.75%. In the low growth scenario, there will be an average of 567 vessels entering the fleet each year, a significant drop from the baseline average of 955. With better prospects for world trade, the world fleet is expected to exceed 80 000 ships in 2025, with an annual growth rate set at 1.75%.

The most significant growth rate of one of the 11 segments considered between 2020 and 2025 according to BIMCO will probably be that of LNG carriers. This equates to the abandonment of crude oil globally and the increasing use of LNG, including in the shipping industry. DNV, for example, recently reported that there were 200 LNG-powered ocean-going vessels operating with an additional 300 vessels capable of operating on the LNG currently on order.

According to BIMCO, the LNG carrier fleet currently consists of 593 vessels, and 85% of the fleet has a freight capacity of between 100,000 and 200,000 cubic meters. In BIMCO’s baseline scenario, the LNG carrier fleet would reach 819 vessels by the end of 2025. The range goes from 799 vessels in a low growth scenario to 839 vessels in a high growth scenario.

While the tanker market has been negatively affected during the pandemic, BIMCO notes that the fleet has recorded more than 40 new orders during the year to date. The crude tanker fleet consists of 2,976 vessels, according to IHS Markit data, and 34% of this fleet consists of vessels in the range of 80,000 to 120,000 dwt. BIMCO expects the longer-term fleet to grow by just under three percent on average each year through the end of 2025, with VLCC driving most of the growth.

Cruise liners are also expected to experience significant fleet growth by 2026. Although this is the second smallest segment of the global merchant fleet by number, with a total of 621 ships at the end of the year. year 2020, cruise lines are expected to increase with a compound annual rate. growth rate of more than four percent in BIMCO’s baseline scenario. Regardless of a low or high growth scenario, the fleet will depart with 19 vessels from the benchmark of 763 vessels in 2026.

Container ships are currently the fastest growing segment. So far this year, BIMCO reports that 229 vessels totaling 2.2 million TEUs have been added to the order book. This compares to deliveries of 393,566 TEUs, leaving a combined order backlog of 4.35 million TEUs, more than double the size it was eight months ago when container ship orders bottomed out at 1.95 million TEUs. Soaring profits and strong demand led to strong demand for new container ship orders. However, the segment is unlikely to be able to maintain this growth rate.

BIMCO also stresses that the growth of maritime transport will also have a direct impact on seafarers and the profession. They noted that sailors have also been under pressure during the pandemic. The expected demand for seafarers in the future is influenced by the expected growth of the global fleet.