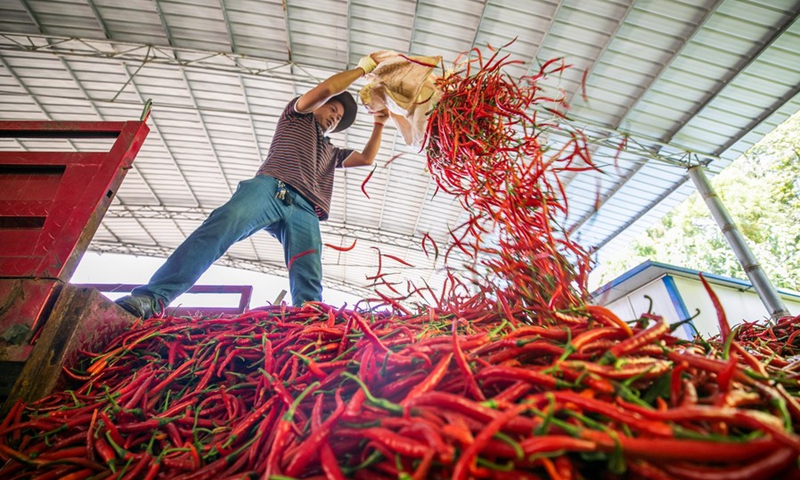 During the fall harvest season, the scent of chili peppers fills a small town in southwest China’s Guizhou Province.

Xiazi Town in Zunyi Town is a famous trading center in Chile. Farmers hundreds of miles away bring in their chili peppers to sell, and brokers with different accents travel there to buy the red products, which later appear on dining tables across the country and around the world.

“We have had another bumper crop year,” said Zhang Zhongyi, chili industry manager in Guizhou. He said he expects the average income of chili pepper growers to reach over 4,000 yuan (about 625 US dollars) per mu this year, or 60,000 yuan per hectare.

Guizhou is one of the largest chili production and sales bases in China. An exotic plant species like the tomato, peppers are called “haijiao” by many locals, which literally means “sea pepper”.

“The word revealed that the species came from the sea,” Zhang said, noting that it was through the ancient silk sea route that chili peppers were imported to China from South America.

Hundreds of years ago, the interior region of Guizhou lacked salt, so locals turned to chili peppers to add flavor to their dishes. Chili peppers have now become a symbol of the province, with the related products exported to 108 countries and regions.

Chen Shunguo, a resident of Xiazi town, started trading chili 28 years ago at the age of 18.

“Carrying a basket on my back, I bought peppers from farmers in the fields before selling them at the market. Back then, a non-local broker could buy up to 1,500 kg from the market and have it delivered by train, ”said Chen, now 46.

Today, Chen’s company covers an area of ​​more than 700 square meters, which includes a processing area, a transaction area and a warehouse, in a chili pepper mall in the city. His company processes some 2,000 tonnes of peppers each year.

As the national chili market, the “China Chili City” mall is home to about 300 chili companies like Chen’s. The center integrated transactions, processing and packaging, cold chain warehousing, logistics distribution, financial services and other functions.

In Suotang Village of Meitan County, about 20 km from Xiazi Town, Li Wei, a 42-year-old farmer, is preparing for the next phase of fertilization.

Li grew a few plants for his own cooking. Since growing 3.3 hectares of chili peppers in 2018, he has found planting chillies to be a lucrative business. This year, he decided to develop the business by subcontracting a total of 33.3 hectares to his fellow citizens with a cooperative.

He hired locals to apply a mulch film and plant, weed, and harvest the chili peppers, paying them over 100 yuan a day. The chili pickers he employs are mostly middle-aged and elderly women who barely had an income in the past.

“The cooperative not only makes better use of the villagers ‘farmland, but also provides them with additional income,” Li said, adding that he spent 200,000 yuan this year on workers’ wages.

The province has bred 183 new species of peppers and introduced more than 120 varieties of peppers. In 2021, Guizhou planted 380,000 hectares of chili peppers, with an expected yield of 7.8 million tons worth over 27 billion yuan.

Working from home in rural areas: a practical guide